Use STAR Answers to Shine Brightly in Your interview 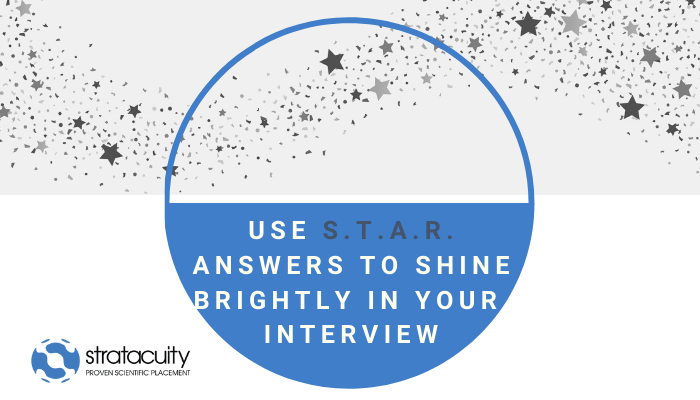 STAR is an acronym that stands for telling a relevant and appropriate “story” as an answer to behavioral interview questions. Below are the 4 parts of a STAR answer.

Have you ever been at a job interview and froze - or at least had to think hard - because someone asked a question like one of these:

“So, tell me about a time when you failed at something, and what you did about it.”

“Can you give me an example of a time you handled a difficult coworker, client, or manager?”

“Tell me about a time you had to collaborate with someone on a project. What did you do to make it successful?”

“What would you consider a significant professional achievement in the past year?”

STAR is an acronym that stands for telling a relevant and appropriate “story” as an answer to behavioral interview questions such as the above. Here are the 4 parts of a STAR answer:

Situation - the circumstance or context for your story. What was going on at the time, where were you working, what was your role, and so on. Briefly, you set the stage to introduce your Task.

Task - what you were asked to do, and if you didn’t say it already, the challenge you were up against in getting it done. This might be a short timeline, difficult stakeholders, something that was new or complex for you, or anything else that makes the task out of the ordinary.

Action - what you did to overcome the problem and achieve your goal. Examples could be you provided training to help others develop a new skill, consulted a mentor, gained agreement from a difficult coworker, or worked extra hours. In some way, your action solved the problem and helped achieve the task.

Result - what was the outcome of the situation? If you achieved the goal, did you achieve it fully? Was the customer satisfied? What other repercussions or effects resulted from this success?

Here’s an example of a STAR answer, in response to “Tell me about a time you had to resolve a conflict with a difficult coworker or stakeholder.”

(Situation) In my last position, my coworker of 2 years was promoted to being our team manager. We hadn’t had the easiest time working together - our skills and responsibilities on the team had been very different. Mine were very technical, and his were very business focused.

Once promoted, he soon started making commitments for me that I often couldn’t meet without regularly working weekends, or that were needlessly difficult. I was so unhappy I was seriously considering leaving my job. I also knew that my boss was also unhappy with what he felt was my resistance to their management.

(Task) I decided the right thing to do was to have, as they say, a “difficult conversation” with my boss.

(Action) I arranged a time to talk and asked if we could be very open with each other during the conversation, even “off the record”. He agreed. I let him know that I was very frustrated, and that I was sure he was too. I wanted us to have a successful working relationship. I asked about what it was he really wanted and wasn’t getting.

My boss told me that he was frustrated, and often put in difficult situations, because he had to give our internal customers a committed delivery date for my work. Sometimes, he didn’t even know if the deliverable was possible, but he had huge pressure to give an answer on the spot. Being new in the position, he didn’t want to appear to be a roadblock, or appear that he didn’t know the capabilities of his team.

I expressed understanding and empathy. I proposed that we solve this by having a few working agreements, and see if it solved the problems for both of us. For example, he would always message me to ask about how fast a project could get done, and I would commit to respond within the same day. If the need was urgent, I would drop anything I was doing and come meet him to give an estimate to a stakeholder on the spot, so my manager would never be left hanging.

(Result) Within a few weeks, our working relationship had improved dramatically. My manager began to understand what assignments were easy for me and which ones were hard and more time-consuming for me. We were both comfortable with my manager giving more and more solid dates to our customers without consulting me. On complicated things, I was called in occasionally and worked out a date right away.

In the end, this turned into a good working relationship for the next 3 years, until we were all shifted to new positions in a reorganization.

There you go! A whole STAR. It directly answered the question and showed a lot of good, solid information on the part of the interviewee. The interviewer has a lot of follow-up question possibilities they might ask you, which is also good.

One STAR, many uses

“But Ryland, I can’t have this kind of answer ready for everything they might ask me!” is a common concern.

Of course you can’t have different answers for everything, but a good STAR can actually be good for several different questions!

Look back at the STAR example I gave you. Would it work, with possibly a little change in emphasis, for any of the following questions?

Tell me about a time you had to communicate a difficult message.

What have you done to build working relationships with difficult people?

Is there a time you had to demonstrate leadership?

Tell me about a time where you had to exercise influence without authority.

Can you give me an example of collaborative problem solving?

Tell me about your approach to teamwork.

Yes, it would work for each of those. You’d emphasize a different aspect of the situation, task, your action, and the result (outcome).

Here is an example of the edit you would do for the last one of those, regarding your approach to teamwork. Use the same situation and task, and then put this at the front of the “action” section.

(Action) My teamwork approach is rooted in the “five dysfunctions of a team”. One of the core tenets of this approach is that team members must trust each other enough to engage in honest, well-intentioned, problem-focused conflicts. I decided that although it was a little scary, I would try to lay out the issue as a “joint problem” for both of us to solve, without anyone being blamed or “causing a problem”.

...and from there, the rest of the STAR would work pretty well.

Let’s do another. How about “a time when you had to demonstrate leadership?” Everything is the same, but start your “task” part like this, instead of what I wrote.

(Task) Leadership comes in a lot of flavors, and I thought of the aspects of leadership here. I felt that we should create a common vision of the future, what problem we were solving, and an agreement about how we would execute. I had to get “buy-in” to the vision.

(Action, slightly edited) I arranged a time to talk and asked if we could be very open with each other during the conversation, even “off the record”. He agreed.

I said that from my perspective, we must both be having a terrible working experience with each other. I wanted a future where we both see the other person as an ally. I would love to know what it is that I’m doing that is causing them a problem, and I’d like to get my perspective on the table as well. Neither of us is intentionally creating a problem, so we should be able to figure this out. He liked the idea.

...continue from here, no further changes for Action. You might make some minor changes to “result” that emphasize how this leadership action resulted in the joint vision becoming successful, and built your working relationship for the future.

Developing a good STAR takes work. You refine them over time, preparing ahead, practicing them, and of course, in an interview!